There’s something funny lurking by the kitchen sink…

Piggy tails specially ordered from the Windsor Farm Shop for Fergus Henderson’s Crispy Pigs Tails recipe. Not so appetising in this state!

The first stage of piggy prep and looking better already.

Herbs, veg, garlic, wine and lemon zest all added and ready to go for a three-hour bathe in the oven…

Crispy Pigs Tails, the finished dish! But the question is, were they offaly good? 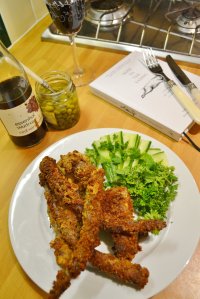 Well, they were nice. I hadn’t expected nice. I had expected unbelievably good or just awful (after 3 hours of simmering, they were very flabby and looked like they’d be the latter!)
I ate them with a little red wine vinegar (as suggested) and a herb and cucumber salad. They were tasty but not full of flavour, the crispness came from the breadcrumbs not the skin. I wonder if this is how Henderson makes them or whether mine turned out differently. I haven’t seen them on the St.John menu so we may never know.
For the amount of time and care it took to make them this wont be a recipe I’ll be making again. However, I am very pleased that I’ve tried it, even just for the novelty factor!

Recipe from ‘Nose to Tail Eating: A kind of British cooking’ by Fergus Henderson of St. John Restaurant.